All You Need To Know About The Just-Released IG Report (Hint: It’s More Deep State Shenanigans)

D.C. Whispers has purposely said very little about the just-released IG report in the days and weeks leading up to today’s release for some very simple reasons:

The IG report will avoid the truth, implicate as few as possible, and in the end, do little to expose the rampant abuses by the Establishment that took place before, during, and after, the 2016 Election. 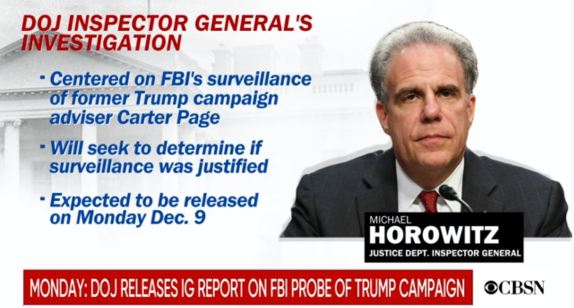 IG Horowitz does not have the power to indict. That alone makes his investigation very limited in both scope and recourse.

Second, and this is something that goes terribly under-reported by Big Media – the report itself goes through an intensive review process by the very institutions it is reportedly investigating. In short, the DOJ, the FBI, the CIA, etc., review and ultimately have the power to approve or deny aspects of the report linked to their respective departments – all under the guise of “national security.”

Third, did you know that one of the primary tools utilized by the Obama-era DOJ to surveille the Trump campaign was the figure of Carter Page – and that IG Horowitz never once sat down and interviewed Mr. Page despite Page repeatedly requesting that he do so?

Let that sink in. How do you avoid interviewing the very figure at the center of the illegal surveillance as part of an investigation into the origins of that surveillance? The answer is you don’t – at least not if it’s a truly honest, fact-finding investigation – Horowitz never interviewed Carter Page. That’s not just odd. It’s either insane or clear evidence the IG never really wanted to get close to the truth because that truth would implicate some very powerful people linked to the Obama administration.

No, what the IG report will conclude are some generalized “abnormalities” in the process that will avoid placing blame on specific individuals, especially those at the higher levels of the Obama-era government.

The real report that is to follow is the one conducted by U.S. Attorney, John Durham. That investigation continues, is far more thorough, and not colored by  the inherent self-protective political bias of the just-released IG report. Attorney General William Barr has purposely awaited the IG report before pushing hard on the Durham report because logistically the latter had to follow the former. With the IG report now out, watch for AG Barr to accelerate the work being done by Durham.

If you want to know the truth about what is going on in the D.C. Swamp and the war for the soul of America, keep checking in here first so you might know the news before it’s news. And know this, it’s often what we don’t report that you should pay attention to because sometimes it’s the silence that speaks loudest.