COMMENTARY: President Trump’s Syria Speech Once Again Shows Us the Reason He Was Elected

Rush Limbaugh, as he so often does, cuts through the far-left media spin and deception to get to the heart of the matter. In this example, it’s President Trump and his policy on Syria – a policy based upon facts, prior promises to American voters, and a disdain for the status quo policies of past administrations that would sacrifice the lives and limbs of our nation’s very best. 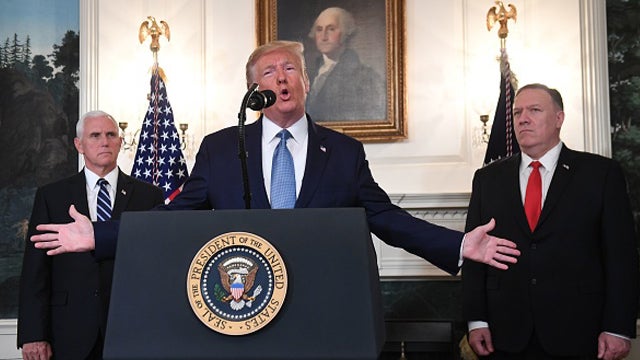 (Above: How appropriate that President Trump spoke on his anti-interventionist policy under the watchful eye of the nation’s very first president who warned the nation to stay out of foreign entanglements whenever possible.)

…And this is where the president, Mike Pompeo, Mike Pence announced the permanent ceasefire in Syria with Turkey. No one hurt. The lives of the precious Kurds have been saved. War has been avoided. It’s a permanent ceasefire. But the point is Trump gave his speech here. His remarks feature many of the reasons he was elected president.

He gave a mini-barn-burner here. He ripped into Obama. He ripped into previous presidents for a bunch of basic dishonesty in committing American troops around the world. He pointed out that the Middle East has become more unstable as more troops have been deployed. The wars have never ended.

And he made a great point, that as we have continued to send troops to these areas of the Middle East and as the chaos in these areas has ratcheted up, guess what else has happened at the same time? We have opened our borders to more refugees and more immigrants. And Trump says these days are over. We’re not gonna go sponsor chaos and then say out of compassion, “Well, come here,” and open our borders. We’re not falling for this anymore.

This is exactly why Trump got elected. He made it very clear what the game has been. The State Department, the permanent Washington establishment commits American troops to little skirmishes here and skirmishes there, and nobody ever wins because they never end. We recycle troops. We sell more ammunition and more weapons. The areas become war-torn and unlivable and the people that live there flee, and they go to Europe and some want to come here.

He made a big deal of the rebuilding of the military that has taken place during his administration for the express purpose of not having to use it. In other words, it being a gigantic deterrent force. It was hot, folks. And you can tell when Trump is pointed and very insistent that the people he’s talking to hear what he’s saying. This is not toying with the media like he does. This was a broadside, if you will, toward the Washington establishment.

So we’ve got a permanent ceasefire. He praised President Erdogan as a guy who loves his country. Has gotten to know him pretty well. He says if something happens, though, if they break the ceasefire, if something happens that wasn’t agreed to, we are prepared to go in there and make them pay the price for it. But these days of routinely sending interminable numbers of troops to these ongoing sectarian battles and wars that have been going on for hundreds of years, no end ever happens.

He’s making a point here. Ten years ago we were told that these 50 troops would be there for 30 days, and we’re still there. And you know what is amazing is that you have the American left, which ostensibly opposes all use of the military. They actually don’t. Democrat leaders don’t. They’re in on this game like everybody else. Just like they are the original segregationists but have gotten away with not being seen that way. They (Democrats) are huge warmongers.

They profit incredibly from it. Their public position is anti-war. Their public position is anti-military. But look at all the political donations they get from — they supposedly hate Wall Street. They supposedly hate the big banks because the big banks screw the average little guy, American consumer. Yet look where all their donations come from. The big banks, Wall Street, military-industrial contractors and so forth. A gigantic scam.

So, anyway, they publicly adopt the position that this is an improper use. Look what they try to do to get us out of Iraq. See, that had a political component. They had to get Bush out. They had to make sure Republicans weren’t gonna win in 2012 after two terms of George W. Bush.

So we have these deployments. We’re told that they’re not permanent, they’re temporary. Trump made a big deal in the campaign of doing exactly what he did today.

Folks, that hits the nail on the head so strongly, I need to repeat it 10 or 12 times. That is so right on the money. That is exactly what’s been going on. And for the longest time, whenever somebody would suggest this is what’s going on, reasonable people would reject it on the basis, “Rush, that’s stupid. We don’t have stupid people. Why would they do this? Why would they purposely want to expose America to potential terrorists and anybody else coming into the country illegally?” Of course, this would be refugees, this would be legally, in a sense. Why would they want to do this? And that’s where the answer gets really hard.

Because the true answer is something people don’t want to contemplate. Well, these are a bunch of people that have globalist visions and don’t view the United States as anything particularly special in the world other than its economy which they just assume is gonna keep trucking. I mean, the answer to the question is there are a lot of people in the Washington government who don’t have any reverence for or respect for the founding of this country. That’s so long ago, so different times, such different times. Not even relevant to today. The world’s a different place. This is so antiquated.

Just like the same people that say you can’t research the original intent of the Constitution because it doesn’t apply to today. These are people that basically do not want to have to hold any reverence for the founding. They don’t want to have to have any respect for it. They want to adapt to it. And that’s why Trump won. Trump is such a stark contrast to that.