Just when you thought the far-left would go no lower they manage to do just that. This time it was (once again) Supreme Court Justice Brett Kavanaugh and decades-old allegations of boorish college behavior. The problem? The allegation was already disproven months ago and the woman alleged to be involved now says she has absolutely no recollection of it ever happening.

That didn’t stop the New York Times from running a story (followed by a tepid retraction after the damage was done) and nearly every Democrat candidate for president calling for the impeachment of Justice Kavanaugh for something all the facts say he didn’t do. 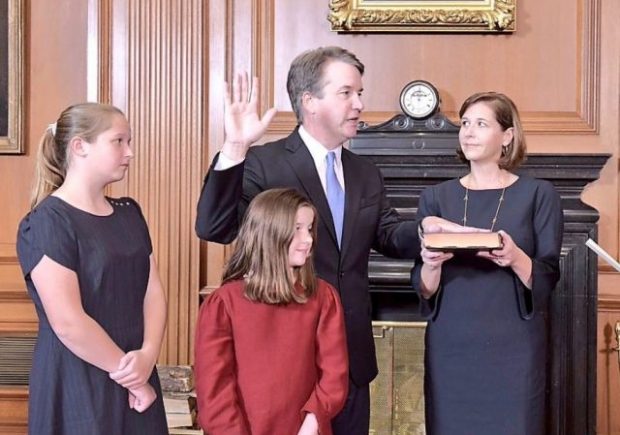 “The Education of Brett Kavanaugh: An Investigation” is neither a look at the education of Brett Kavanaugh nor an investigation. They admit they found no evidence to support the claims made by Christine Blasey Ford or Debbie Ramirez, although they say their “gut reaction” to the allegations is that they are true. They generously concede that their “gut” tells them that Michael Avenatti client Julie Swetnick’s claims are not true, citing the lack of corroboration.

The only supposedly new claim made in the book isn’t new and comes from Democrat attorney Max Stier, a Yale classmate of Kavanaugh’s with whom he has a long and contentious history. In the words of the Yale Daily News, they were “pitted” against each other during the Whitewater investigation in the 1990s when Kavanaugh worked for Independent Counsel Ken Starr. Stier defended President Bill Clinton, whose legal troubles began when a woman accused him of exposing himself to her in hotel room she had been brought to. Clinton later settled with the woman for $850,000 and, due to a contempt of court citation for misleading testimony, ended up losing his law license for five years. Stier worked closely with David Kendall, who went on to defend Hillary Clinton against allegations of illegally handling classified information. Kavanaugh’s reference to his opponents being motivated by “revenge on behalf of the Clintons” met with befuddlement by liberal media, despite the surprisingly large number of Clinton-affiliated attorneys who kept popping up during his confirmation hearings.

In any case, Stier’s claim, which even two Democratic senators’ offices didn’t find particularly worthwhile, was that he had seen an inebriated Kavanaugh, pants-down, at a freshman-year party. Stier’s claim to the staffers, we’re told, was that other people at the party put Kavanaugh’s genitalia into the hands of a classmate. Another unnamed person alleged said that he or she might have remembered hearing that the female student had transferred out of her college because of Kavanaugh, “though exactly why was unclear.”

The reporters, who describe Democrats in glowing terms and Republicans otherwise, say that Stier is a “respected thought leader” in the defense of the federal bureaucracy. They don’t mention his history of working for the Clintons. As for the victim? They say she “has refused to discuss the incident, though several of her friends said she does not recall it.”

To repeat: Several of her friends said she does not recall it.

So to summarize, the only new claim in the new book is that a Democratic attorney told two senators that he saw an incident where a third party allegedly did something to Kavanaugh and the young woman. In their book, the authors are upset that this claim didn’t lead to a massive FBI investigation, although they don’t explain why they think it should have.

Pogebrin and Kelly left the victim’s denial out of their New York Times story. It is unclear why the reporters and editors allowed the story to be published without this salient fact that they conceded, albeit briefly, in their own book.

The above is a perfect example of the far-left’s manic obsession with character assassination regardless of facts. For them, the only thing that matters is that those they disagree with politically are destroyed. The problem for America is that many of these people occupy positions of influence and power in government and the media.

Comedian Dave Chappell attempted a warning about the state of the far-left. Predictably, he was attacked for having an opinion. Check it out: