“First Time In History That A President (Obama) Spied On Another Candidate’s Campaign.” – A.G. William Barr

Notice how quick the far-left media was to celebrate the just-released I.G. report as vindication for figures like James Comey and other nefarious Deep State operatives long before there was sufficient time to process the report?

Now, just 24-hours later, it has become undeniably clear that the I.G. report was anything but vindication. Of course, the far-left media is largely ignoring today’s stunning revelations in favor of “muh-impeachment” coverage. Ah, but that has not lessened even a little bit the determination of Attorney General William Barr from doing his job and bringing the nation some semblance of actual justice for what amounts to one of the most shocking and dangerous-to-democracy political scandals in U.S. history. 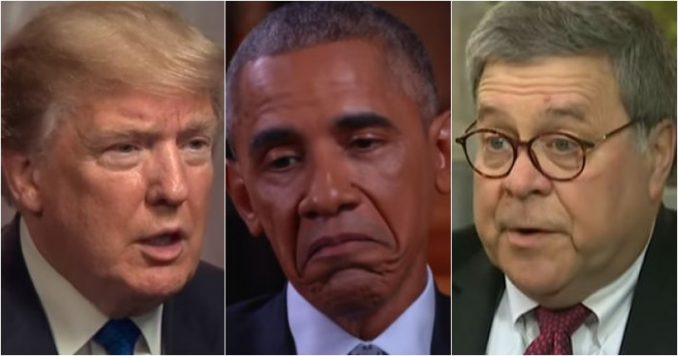 In an interview with NBC News, Attorney General William Barr said the most dangerous fact revealed by the Inspector General’s report on the FBI’s surveillance of the 2016 Trump presidential campaign is that the “incumbent government” used its powers “to spy on political opponents” in a way that could have affected the election.

He added that, as far as he knows, this was the “first time in history” the federal government used “counter-intelligence techniques against a presidential campaign.”

Barr replied, “I think probably from a civil liberties standpoint, the greatest danger to our free system is that the incumbent government use the apparatus of the state – principally the law enforcement agencies and the intelligence agencies — both to spy on political opponents but also to use them in a way that could affect the outcome of the election.”

(And that is exactly what happened to President Trump by then-president, Barack Obama.)

“And we have to remember, in today’s world presidential campaigns are frequently in contact with foreign persons,” said Barr. “And indeed, in most campaigns there are signs of illegal foreign money coming in.”

“[But] we don’t automatically assume that the campaigns are nefarious, traitors acting in league with foreign powers,” said the attorney general. “There has to be some basis before we use these potent powers in our core First Amendment activity.”

For the FBI to launch the Russia probe, “I felt this was very flimsy,” said Barr. “Basically, I believe the Department [of Justice] has a rule of reason, which is, at the end of the day, is what you’re relying on sufficiently powerful to justify the techniques you’re using? The question there is, how strong is the evidence? How sensitive is the activity you’re looking at, and what are the alternatives?”

“When you step back here and say, what was this all based on, it’s not sufficient,” he said.

“Remember, there was and never has been any evidence of collusion,” said the attorney general, “and yet this campaign and the president’s administration has been dominated by this investigation into what turns out to be completely baseless.”

Earlier in the interview, Barr said, “I think our nation was turned on its head for three years based on a completely bogus narrative that was largely fanned and hyped by a completely irresponsible press.”

“I think there were gross abuses,” he added, “and inexplicable behavior that is intolerable in the FBI.”