For most political candidates, especially those attempting to win the Democrat Party nomination for president, it might very well have been the end of a campaign. Audio was released that detailed former New York Michael Bloomberg all but laying the vast majority of violent crime at the feet of Black and Latino America, a fact he then went on to explain necessitated an increasingly strong-handed presence of law enforcement in minority-dominated neighborhoods.

What followed was an astonishingly fast response from the vast Bloomberg media machine that effectively buried the story before it could escalate into a national conversation. Democrat voters will have to now decide if such a man with such vast wealth and influence to hide the truth about himself is the kind of candidate they want to carry the Democrat banner in 2020.

What follows below is an outline of how Bloomberg controls the media narrative that is his own conflicted past:

As his staff was planning a week of events in Super Tuesday states and hoping to capitalize on continued feuding among his rivals, a 2015 audio clip of Bloomberg making charged remarks about young black and Latino men surfaced online. Surprised and jittery aides were troubled hearing Bloomberg remark on tape that most murders are committed by young “male minorities” who are so similar that they could all be described on a standardized “Xerox” form distributed among police officers.

Inside Bloomberg’s sprawling Manhattan headquarters, his team sprung to action: Emails started flying before sunrise about how to respond. Strategies about how to handle President Donald Trump’s tweet calling him a “total racist” were debated. And staffers, worried about how to manage black surrogates and supporters whose endorsements were to be rolled out that week, gathered for a morning meeting.

Leaders for Bloomberg’s black and Latino constituency teams gathered on a call with staffers spread across the country to get ahead of the news and calm their nerves. They talked about Bloomberg’s evolution from high-profile defender to deeply apologetic critic of stop and frisk, sources familiar with the exchange told POLITICO. Advisers to the former New York mayor distributed talking points that cataloged his work on economic opportunity and racial justice.

Meanwhile, in a conference room at his Times Square headquarters, the mayor assembled about 20 black pastors for a previously scheduled meeting that lasted more than two hours and included face time with Bloomberg. The meeting had been planned to discuss Bloomberg’s latest initiative aimed at helping African Americans, but the recording quickly came up.

The episode broke at an important juncture for Bloomberg. The billionaire businessman has gone virtually unchecked by rivals even as he’s bombarded the country with hundreds of millions in TV ads, amassed a staff of nearly 2,500 and risen steadily in polls, including among African Americans. His candidacy has gained steam on the strength of his unlimited checkbook and the weakness of his Democratic opponents, none of whom look poised to run away with the nomination.

For anyone else, the scratchy tape — on which Bloomberg argued that the only way to get guns out of the hands of young “minorities” is “to throw them up against the wall and frisk them” — would pose a potentially fatal blow.

But Bloomberg, in the roughest 48 hours of his young campaign, rallied a vast network of black surrogates and community leaders whose causes he’s backed or invested in to vouch for his character as he works to contain the firestorm.

(That’s a fancy way of saying Bloomberg has paid them a lot of money over the years and now he was calling in that debt.) 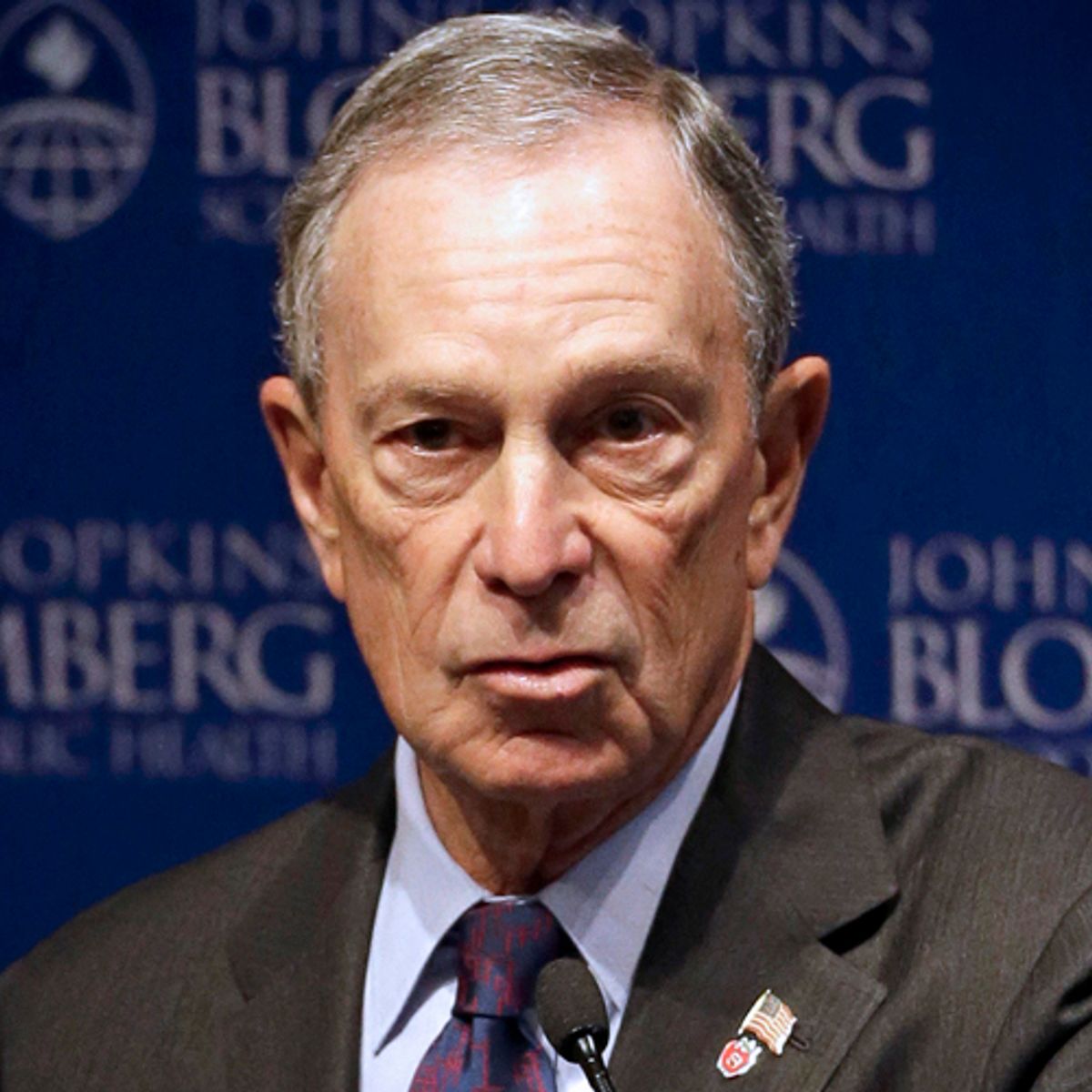 One pastor in particular pressed Bloomberg, who began his presidential campaign by apologizing for his race-based policing policies.

“We accept your apology at one level, but we want to let you know that we’ll be looking for more concrete expressions of your apology in terms of the African American community,” said Calvin Butts, a Harlem pastor who attended the meeting, describing the line of questioning from a different clergy member in attendance. Butts called it a “genuine” exchange and “not hostile”; Bloomberg was quiet and “accepted what was being said to him.”

Butts said Bloomberg’s financial support of causes important to black New Yorkers throughout his time in office and after helps alleviate concerns about his past embrace of the policing tactic stop and frisk. Butts recalled Bloomberg offering his economic development operation a handsome check in 2008, timed to the bicentennial of his Abyssinian Baptist Church. “He used his money, which is one of the reasons I continue to support him, to express his sincerity,” Butts said.

By the end of Tuesday, Bloomberg’s team had a damage control plan in motion.

Several Bloomberg allies went on record to defend their friend and, in some cases, patron.

While their efforts won’t quiet skeptics, the show of force opened a window into the dexterity of an operation that has spent months preparing for the fallout of positions that are out of step with the left plank of the party he hopes to lead.

Stockton, Calif., Mayor Michael Tubbs, a national co-chairman of the Bloomberg campaign, said in an interview that the moment presents Bloomberg with an opportunity to make the case his views have changed, while putting the episode in broader context.

“It’s really ahistorical to point out [problems with] stop and frisk as if the ’94 crime bill that predated Bloomberg’s mayorship didn’t exist,” said Tubbs, referencing tough-on-crime legislation that was championed by Joe Biden and supported by Bernie Sanders. “The views that are espoused on that tape were definitely terrible, but that was a predominant view driving criminal justice policy for the past 200, 250 years in this country — this idea that black folks and Latino men are inherently more criminal than others.”

Bloomberg also held a conference call with the Black Economic Alliance to apologize.

Bloomberg preempted his own November announcement with an apology for stop and frisk at a black church and reiterated his remorse in televised interviews and to reporters trailing him on the road. Last month, in a speech in Tulsa, Okla., unveiling his plan to boost black homeownership and job opportunities, Bloomberg said he was wrong not to act faster to cut the number of police stops. He said he was sorry for not better understanding the effect it was having on black and Latino communities.

But the recording renewed misgivings that many supporters or would-be supporters have about his record. Critics and rival campaigns quickly disseminated the clip to reporters, noting that it’s one thing to read his position on paper — and another to hear Bloomberg say it himself. In the audio, he said the vast majority of murders — murderers and murder victims — fit one M.O: “You can just take the description, Xerox it, and pass it out to all the cops,” Bloomberg said.

“They are male minorities, 16 to 25. That’s true in New York. That’s true in virtually every city,” he continued. “And that’s where the real crime is. You’ve got to get the guns out of the hands of the people that are getting killed.”

At a stop in Chattanooga, Tenn., on Wednesday, Bloomberg said his remarks don’t represent “how I led the most diverse city in the nation” — or how he runs his eponymous company.

Anyway, Bloomberg added, he got elected three times in New York so “the public seems to like what I do.”

“I think they’re pretty happy,” he added. Bloomberg orchestrated a change in municipal law so he could run for that third term, vastly outspent his opponent and won the race by less than 5 percentage points.

On Wednesday, Bloomberg rolled out endorsements from three members of the Congressional Black Caucus. Reps. Lucy McBath of Georgia, Gregory Meeks of New York and Del. Stacey Plaskett of the Virgin Islands announced their support, as did a gospel singer who will help launch “Mike for Black America” this week in Houston.

Late Tuesday, the pastors had all signed on to the statement defending Bloomberg against attacks from Trump, who in a deleted tweet branded Bloomberg as racist. A Bloomberg aide said the black pastors requested on their own to issue the statement.

And Meeks, who once fought Bloomberg over stop and frisk, said he decided to endorse him as he watched Biden falter in Iowa and New Hampshire.