REPORT: Chuck Todd and the Demise of True Journalism

Chuck Todd isn’t a journalist so much as an increasingly far-left globalist mouthpiece for the Democrat Party. If a member of the liberal elite is at fault Todd either ignores that wrongdoing, defends it, or sympathizes. If someone who is politically moderate (what the far-left media now calls the far-right) Todd attacks, exaggerates, vilifies, and attempts to discredit. 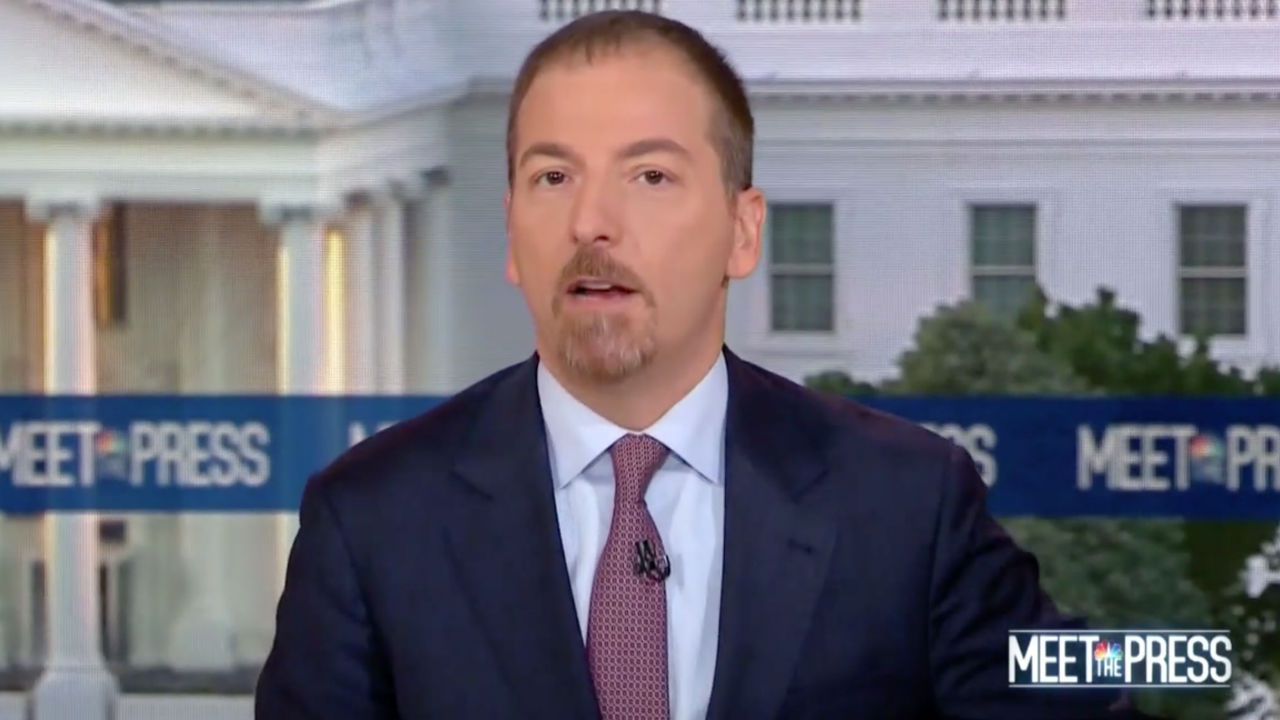 This is the 24/7 biased news cycle in America where true journalism has been replaced by partisan, anti-American hackery.

But far from being a laudable moment of press accountability, the “Meet the Press” interview was a disappointing turn for Todd and the show, once one of the media’s flagship brands. Indeed, the full interview illustrated how the media are increasingly obsessed with performative demonstrations of their political views, and less concerned with simply being informative.

Chuck Todd’s first question to Johnson was about the Wisconsin senator’s statement that he “winced” at the suggestion that military aid to Ukraine was potentially linked to investigations into Biden family dealings in that country. Johnson pivoted to attacks on President Trump by the media and intelligence agencies over the last two years.

After sighing loudly, Todd said, “I have no idea why Fox News conspiracy propaganda stuff is popping up on here.” (NOTE: When a former Ukranian official says UNDER OATH that he was fired in order to halt an investigation and protect the Biden family that’s not a conspiracy – it’s news. The real conspiracy is the media’s refusal to cover facts in favor of hyper-partisan spin.)

While Todd’s dismissal of Johnson was met with applause from fellow journalists, was this an appropriate stance from a newsman purportedly concerned with facts?

The Trump campaign and administration were investigated for several years both by an internal counterintelligence probe at the FBI and a powerful special counsel. Many apparent abuses of power at the FBI during that probe have been found and are being officially investigated. (Again, that is a REAL story but it continues to be ignored/buried by the likes of Chuck Todd who fear it might further expose their friends/masters on the far-left.)

In August, fired FBI Director James Comey was the subject of a criminal referral from Justice Department Inspector General Michael Horowitz for illegal leaks to the media meant to undermine Trump and further the Russia investigation. The DoJ declined to prosecute. Former acting FBI Director Andrew McCabe was fired after the inspector general found he lied under oath to investigators about his own leaks. Many other officials involved in surveillance of the Trump campaign were fired, transferred, or left under pressure. Peter Strzok, the nation’s former top counterintelligence officer, was having an extramarital affair with FBI colleague Lisa Page, and their text messages betrayed extreme bias and unprofessional attitudes. In one text exchange, Strzok suggested the probe of Trump was an “insurance policy” in case Trump won in 2016. (And what has been Chuck Todd’s stance regarding these now undeniable facts? He shrugs it off as not “newsworthy” and focuses only on trying to damage the Trump administration.)

Attorney General William Barr is investigating how the theory of Trump collusion with Russia was used to launch a probe of the political campaign. Veteran prosecutor John Durham is also investigating the origins of the probe, which led to the use of wiretaps, human informants, overseas intelligence assets, national security letters, and other surveillance by the FBI. Barr has testified that he is also looking into the role agencies other than the FBI played in the surveillance. (Again, not a “conspiracy theory” but quite possibly the single greatest political scandal of our lifetimes but again, largely ignored by the likes of Chuck Todd.)

Johnson, as chair of the Senate Homeland Security and Governmental Affairs Committee, is charged with oversight of some of these agencies and activities. Over the course of the last few years, he has made official requests for information from executive branch authorities to get to the bottom of the unprecedented surveillance of the Trump campaign by law enforcement and intelligence agencies.

What Todd is telling viewers is that official investigations from Johnson’s committee, the Justice Department, and the attorney general are actually just outgrowths of a conspiracy theory. The public might be interested to know what Johnson is working on related to these probes. Johnson mentioned his recent letters requesting information from the Intelligence Community Investigator General, which are actually newsworthy. But Todd wasn’t interested.

Unsurprisingly, the interview went downhill after Todd made his accusation against Johnson. The “MTP” host said, “Senator, please. Can we just answer the question, instead of making Donald Trump feel better that you’re not criticizing him?” How could Todd possibly speak to his interviewee’s motivations here? Is it not possible that Johnson, who hardly has a reputation for being a defender of Trump at all costs, simply thinks that the president has been treated unfairly with two years of specious theorizing about his ties to Russia, which were improperly investigated and then fed to a press that reported them uncritically?

Relatedly, has Chuck Todd watched any of the other programming on MSNBC, where he appears daily, over the last two years? A little over a month ago, his colleague Lawrence O’Donnell had to apologize for an entirely unsubstantiated report in which he claimed a Russian oligarch co-signed loans Donald Trump once took out.

The bottom line is that if most of the people watching this exchange had someone – even a friend — question their sincerity and call them a lackey, they wouldn’t put up with it. And it’s infinitely worse to have an ostensibly professional journalist question someone’s integrity this way on national TV.

Within 24 hours, the story about the Johnson interview had become a feedback loop of media self-congratulation. The next morning, MSNBC brought on Wisconsin Rep. Mark Pocan, a Democrat, to spike the football and declare that his fellow state delegation member “went off in conspiracy land,” adding that he “drank the MAGA red Kool-Aid.”

Again, Johnson is the chairman of the Senate’s Committee on Homeland Security and Governmental Affairs, and also serves on the powerful foreign relations and budget committees. What Johnson says is news, and it’s more than likely that he is privy to all kinds of information Todd doesn’t know. (Or does know some of it because it’s become very clear far-left members of Congress and the Deep State are only too eager to leak to the media when it helps their anti-American agenda.)

Chuck Todd, however, appeared very interested in why Ron Johnson doesn’t think like Chuck Todd. Instead of letting his guest say his piece, or at least reframing his initial question in a way that might be less confrontational, the host attacked the guest personally. He then spent much of the interview trying to get at why Johnson doesn’t buy into the same narratives about Trump that Todd clearly believes. We learned nothing new about Trump or Ukraine or anything else for that matter, so the interviewer failed at his most primary responsibility: eliciting new information.

And yet, according to Columbia Journalism Review, “Online, Todd won plaudits for his uncompromising questioning, though some of his critics noted that his newfound aggression with misleading interviewees should be a baseline performance, not an exception.”

If Todd’s interview with Johnson is the new baseline, the media, which have been bleeding credibility long before Trump ever arrived on the political scene, are going to have an even harder time regaining the trust of the American people.

It didn’t seem possible that Todd’s abilities as a real journalist could be as lacking and inconsequential as the quickly retreating hair on his oddly shaped head but somehow he managed to devolve to that parking lot puddle depth. Now we are left to wonder how much lower can he possibly go?