As President Trump addressed the nation this weekend to share details of the death of long-feared ISIS leader Abu Bakr al-Baghdadi at the hands of the U.S. military, another even greater enemy of America, House Democrats, were hunkered down in a D.C. basement frantically trying to bail water from the sinking ship that is the pathetic anti-Trump impeachment inquiry. 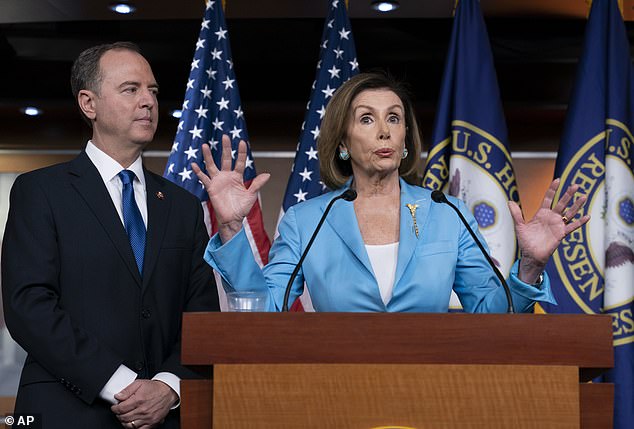 What are Pelosi and Dems afraid of?

Watching the unconstitutional House Democratic impeachment process – which Sen. Ben Sasse, R-Neb., has described as a “partisan clown show” – you have to ask yourself: What are the Democrats afraid of?

If they had a good case, the Democrats would be proudly putting it out in the open so all Americans could learn the facts that would convince them to support impeaching the duly elected president of the United States.

In fact, the Democrats seem to have a pathetic case that keeps falling apart.

After the Mueller investigation failed to find President Trump guilty, the Democrats could have turned to legislating and fighting over real issues, like health care.

After all, in 1998 we were faced with Independent Counsel Ken Starr’s report, which charged that President Bill Clinton was guilty on 11 counts including perjury, which is a felony.

If Mueller’s report had used the word “guilty” 11 times the Republicans would have been forced to join in a serious investigation of the president.

However, when Mueller did not use the word “guilty” even once, the need for an investigation ended.

Then, as the Democrats squirmed under the attacks of their activists who were determined that President Trump should be impeached just for being President Trump, they found a new excuse to investigate.

House Intelligence Committee Chairman Adam Schiff, D-Calif. – who was consistently dishonest and wrong for two years of Russian collusion stories – suddenly had a whistleblower who was anti-Trump.

The Democrats were ecstatic. They now had an excuse to make their hardcore, left-wing, anti-Trump partisans happy.

House Speaker Nancy Pelosi, D-Calif., was so eager to appease the left that she announced the investigation before Democrats even had the whistleblower’s report and before they had seen the transcript of President Trump’s phone call with the new, reform-focused Ukrainian president.

Now there are reports that after five different disclosures undermining the whistleblower’s credibility, the House Democrats may not even call him to testify.

(NOTE: The far-left media has said almost nothing about this because it exposes the “impeachment inquiry for what it truly is – a complete hoax.)

This means that the person who was the excuse for the whole investigation is now so discredited that House Democrats know he would be an embarrassment and would make even more of a mockery of their phony impeachment effort.

In some ways, the collapse of the whistleblower is reminiscent of the collapse of the attacks on now-Supreme Court Justice Brett Kavanaugh. Big opening smear, wildly hostile headlines, excited anti-Trump talking heads, and then the balloon loses air, the case collapses and it is on to the next dishonest smear.

The secret nature of the Schiff kangaroo court really means we know nothing for certain about any of the witnesses or their testimony.

Consider the case of Bill Taylor, a very reputable senior diplomat who is now the acting U.S. ambassador to Ukraine.

As Marc Thiessen reported: “Cellphones are not permitted inside a SCIF. Yet somehow what appear to be cellphone photos of his prepared statement were leaked to the news media.

…Yet despite the selective leaks by the Democrats, House Republican Leader Kevin McCarthy, R-Calif., said that “in 90 seconds, we had John Ratcliffe [R-Texas] destroy Taylor’s whole argument.”

Yet McCarthy was gagged by the Democrats’ secrecy rules. “We can’t really talk about it,” he said.

Ratcliffe flatly told Fox News there were new details brought to light but said there was nothing that was “worthy of impeachment.”

Ratcliffe went on to say: “The one thing that you find out in this process is all this information is just like that whistleblower … everything is second-, third-, and fourth-hand information.”

The Democrats’ partisan impeachment inquiry is an un-American, unconstitutional process that violates the due process clause of the Bill of Rights. As we see in Iowa, accused murderers who are illegal immigrants are being granted more protection of their right to due process than the president of the United States.

Every House Democrat must be made to bear the burden of supporting this kangaroo court “partisan clown show.”

Every House Democrat should be asked: “What are you afraid of that you can’t let the American people see the facts and decide for themselves?”