REPORT: President Trump Is Fighting Back Against Those Who Tried To Steal The 2016 Election

The last thing the Deep State swamp that is Washington D.C. wants is light being placed upon the darkest corners of media manipulations, globalist pay-to-play schemes, and outright election fraud that is the very oxygen these swamp creatures breathe.

President Trump is that light and the D.C. swamp hates him for it.

Buried somewhere in recent impeachment reporting was the real news that federal prosecutors are conducting an international dragnet to find the perpetrators of the Russia hoax. Last week, the Justice Department issued a statement:

“A team led by U.S. Attorney John Durham is separately exploring the extent to which a number of countries, including Ukraine, played a role in the counterintelligence investigation directed at the Trump campaign during the 2016 election.”

It was later learned that Attorney General Barr was absent from Washington and could not answer questions because he was in Italy, where Josef Mifsud—the Western asset who plays a Russian collaborator in the Mueller Report—lives. Officials in the UK and Australia also have been contacted.

Obviously, the CIA is trying to get out ahead of its impending embarrassment by fabricating a scandal packaged as a whistleblower complaint suggesting, incredibly, that the president of the United States is not permitted to solicit foreign assistance in a criminal investigation.

Which is doubly outrageous considering that all these foreign countries are only muddied in this mess because the Obama Administration did just that on behalf of the Clinton campaign; i.e., sought foreign assistance to investigate a purported crime involving Trump.

In the chaotic three years that have ensued, it has been demonstrated beyond a doubt that Trump did not collude with Russia. That crime was a fabrication.

The latter was sourced in no evidence, a fake dossier, FISA abuse, improper coordination with foreign spy services, and leaks tactically timed to hurt Republican chances in the election.

The Barr/Durham investigation is sourced in the Joe Friday “just the facts, ma’am” policing power vested in the executive branch by the Constitution.

They are asking: How was an investigation started with no evidence? How was the fake dossier used? Why were Ukraine, England, Australia and Italy involved? Who are the treasonous bastards who misused American power to conduct a campaign dirty trick?

If the answer to the last question happens to be “Trump’s potential rivals in 2020,” please let’s avoid the through-the-looking-glass editorial position of the New York Times that Trump is trying to “steal” the next election.

No, Trump is trying to get to the bottom of what happened in 2016 and he is oath-bound to continue his hot pursuit even if potential political rivals are implicated.

Media Malpractice Comes Back to Bite Them

The media may not like it, but it is on them that they missed the real scandal: The FBI never analyzed the DNC computers the Clinton campaign claimed Putin hacked. That task was left to a contractor retained by the DNC, CrowdStrike.

One need not be a conspiracy theorist to conclude that the DNC paid a hired gun to say that the amateurish Russian fingerprints purposely left on the computers were from actual Russians. That is, after all, the way expensive opposition research works in a presidential campaign.

Leaving aside for a moment how outrageous it is to appoint an interested party to do the hands-on investigation of election meddling under the banner of the FBI, why aren’t our newshounds more interested that Trump asked the Ukrainian president last week about “CrowdStrike” by name and an unidentified wealthy person associated with it?

He was referring to either CrowdStrike’s chief technology officer and co-founder, Dmitri Alperovitch—a Russian expat and a senior fellow at the Atlantic Council, a think tank with an anti-Putin agenda; or to Ukrainian billionaire Victor Pinchuk, a $10 million donor to the Clinton Foundation (with additional millions promised) who also funds the Atlantic Council.

You would think that the media might exit the DNC’s impeachment talking points long enough to ask why those insiders might be important to this inquiry. Instead, they are completely ignoring the true purpose of the call.

If the New York Times developed an ounce of genuine curiosity, it would discover that the Ukrainian conspirators may be rich, but they’re not too smart. They used the same CrowdStrike getaway car in a different heist at about the same time.

On December 22, 2016, CrowdStrike claimed to have uncovered evidence that Russians hacked into a Ukrainian artillery computer app to help pro-Russian separatists. The Voice of America later determined the claim was false.

Ukraine’s Ministry of Defense was forced to eat crow and admit that the hacking never happened.

The words “deep state” are thrown around to describe the conspiracy by American spies and their counterparts in Ukraine, Italy, Great Britain and Australia to get Trump, but that is perhaps too generous.

It sounds sophisticated and Bond-ish but fails to account for the bumbling and preening that are the most visible attributes of the Russia hoax.

James Comey staring at tall trees connotes nothing deep. These people are first-class chumps whose self-regard is based on their place in the hierarchy of the peculiar world where they are important. 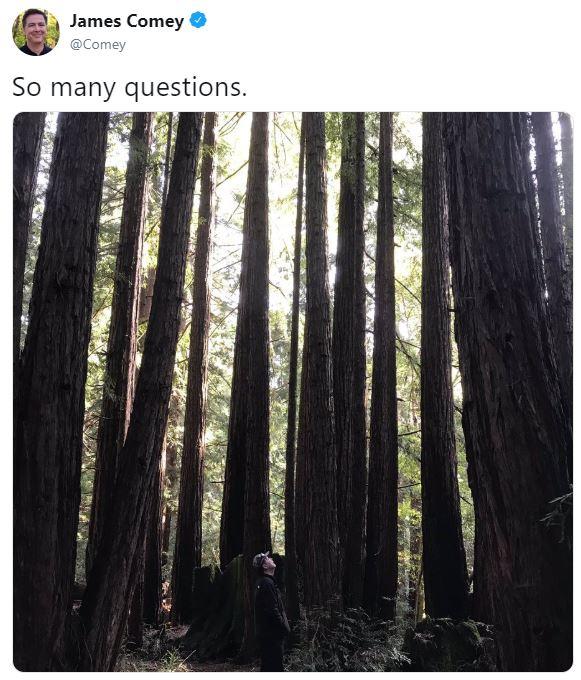 That goes for the brilliant lights at the New York Times, the Washington Post, and CNN, too. As well as for NeverTrump pundits who also will be buried in the rubble if this world is allowed to collapse.

That’s why they are out in front of everyone saying, ”Move along, nothing to see here!”

The 64 million who voted and will again vote for Trump (and that number is growing by the day) are insisting to know what really happened. There will be a temptation to stop the investigation short of implicating important people, but it’s too late for that.

It is good to hear our attorney general is working the night watch on the international beat, knocking on foreign ministry doors, and asking for “just the facts.”