REPORT: President Trump’s War Against The “One Branch Government”

It’s called the “Administrative State” – that collection of deeply entrenched lifetime bureaucrats whose authority was suddenly increased tenfold during the Obama years and that now threatens to negate the Constitutionally mandated powers of the three branches of government.

On day one of his first term President Trump has gone to war against this “Administrative State” on behalf of the American people. He deserves to be recognized and applauded for doing so. 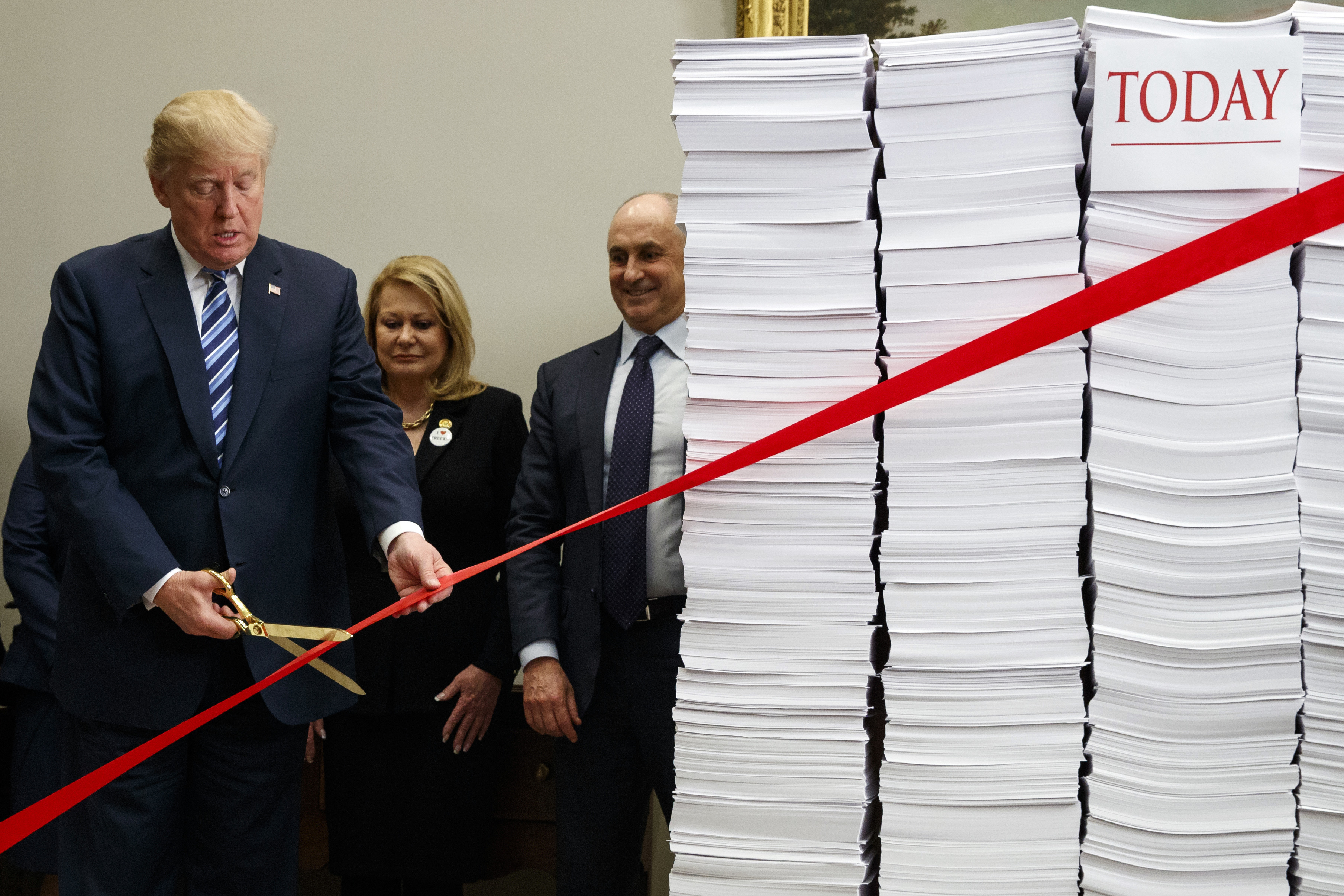 Via The Las Vegas Review:

The rise of the federal administrative state has transformed scores of executive agencies into a quasi-legislative branch of government that enjoys wide latitude to interpret law while imposing regulations on business and individual behavior. But by ceding so much rule-making (read: legislative) authority to unelected bureaucrats, this arrangement serves as a clear threat to the separation of powers concept embedded throughout the Constitution and intended to protect against the tyranny inherent in consolidated authority.

“The administrative state has the power to enforce its laws, as it alone has interpreted them, liberated from any meaningful review by the courts and often from any meaningful control by the president,” wrote Charles J. Cooper, who served in the AG’s office under Ronald Reagan, in a 2015 essay for National Affairs. “It can truly be said that, in the main pursuits of everyday life, we are ruled by a one-branch government. And the ‘experts’ who run it are accountable to no one.”

It will ultimately be up to Congress and the courts to reverse this dangerous trend. But Mr. Trump deserves credit for joining the battle.

Last week, the president took another important step toward reining in the bureaucracy by issuing two executive orders meant to blunt a prominent tool agencies use to expand their domain: so-called “guidance” letters issued to intimidate entire sectors of the economy into bending at the whim of federal bureaucrats.

Recall that the whole due process conundrum on campuses involving sexual assault is the result of a 2011 Department of Education “guidance” memo that pressured universities to lower the burden of proof in such cases. The same goes for relaxed disciplinary policies in many public schools — the result of similar “guidance” from federal education officials upset with racial disparities in school suspensions. In 2013, the Journal noted, another “guidance” letter from the Consumer Financial Protection Bureau implied that auto lenders “could be liable for discrimination if their portfolios showed disparate racial impact.”

Dozens more examples abound. But what all these directives have in common is that they were issued outside the rule-making process. “Think of guidance as an off-the-books way for the government to ignore commonly held understandings of fairness,” Michael P. Degrandis wrote for Reason.com last week. “It’s a shameless, unconstitutional scheme designed to skirt judicial review, avoid public scrutiny and evade accountability.”

To make matters worse, Mr. Degrandis points out, agencies “use guidance to avoid judicial review” because the courts won’t grant standing to sue until a regulation is final, “but courts don’t typically view guidance as final agency action.”

Mr. Trump’s executive orders, however, aim to right these wrongs. The first demands that every new “guidance” memorandum be posted online for the public to review. It must also declare that “it does not bind the public, except as authorized by law or as incorporated into a contract,” the Journal reports. The intent is to ensure “that Americans are subject to only those binding rules imposed through duly enacted statutes or through regulations lawfully promulgated under them, and that Americans have fair notice of their obligations.”

The second order ensures that Americans will not “be subjected to a civil administrative enforcement action or adjudication absent prior public notice of both enforcing agency’s jurisdiction over particular conduct and the legal standards applicable to that conduct.”

Russ Vought, acting director of the White House Office of Management and Budget, put it succinctly. “These executive orders,” he said, “give this administration the tools to defend Americans’ freedom and liberty against off-the-book regulations and prevent unfair penalties from being levied on American families and business by rogue agencies.”

There is, of course, a proper role for a regulatory bureaucracy in a democratic republic. But empowering it to operate largely unbound by the traditional checks and balances represents a very real danger. The president’s orders are welcome and long overdue.