That has been House Democrats’ fake impeachment “inquiry” that has yet to be put to a vote while allowed to continue illegally harassing a president and dangerously dividing a nation. 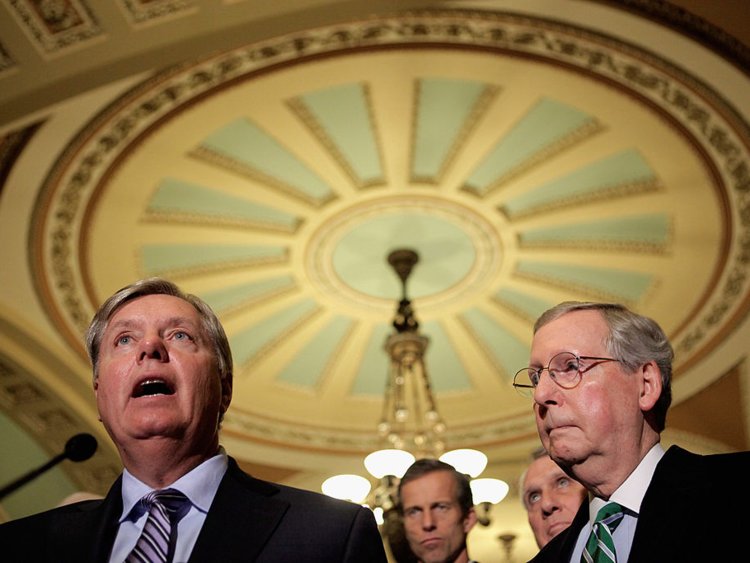 Republicans have finally had enough.

On Wednesday, dozens of House Republicans made their anger known and protested the closed-door impeachment proceeding Democrats were conducting, holding a press conference and delaying the proceeding until they were allowed in.

Now, on Thursday, the Senate is backing up the GOP in the House.

“This is a kangaroo court and it will not stand,” Graham said this week. “I’ve got a resolution saying if you’re going to impeach the president give him the same rights that Richard Nixon had and that Bill Clinton had…what’s going on now is disgusting.”

McConnell said he “obviously” supported the effort. His support is key because he would control whether any impeachment is basically rejected if it reaches the Senate.

Republicans and the GOP base have been very unhappy with the way the Democrats have been proceeding. Democrats have been trying to play both ends against the middle, appeasing their base by claiming they’re having an impeachment inquiry despite having no vote, while not having to put the issue or their vulnerable members in pro-Trump districts on the record in such a vote.

In the case of Bill Clinton, not only did you have a formal House vote for the inquiry, you had a finding by Ken Starr of 11 grounds, including perjury, obstruction of justice, witness-tampering and abuse of power which preceded it. Now you have none of that.

(This is a very important point. President Trump has done nothing wrong. There have only been opinions, rumors, media-generated innuendo – ALL politically motivated. Never before has a political party used the threat of impeachment based on ZERO actual evidence of wrongdoing.)

“Here’s the point of this resolution. Any impeachment vote based on this process, to me, is illegitimate, is unconstitutional, and should be dismissed in Senate without a trial,” Graham told Fox News’ “Hannity.”

The chairman of the Senate Judiciary Committee said the resolution “puts the Senate on record condemning the house for the future of the presidency. We cannot allow future presidents and this president to be impeached based on an inquiry in the House that’s never been voted upon that does not allow the president to confront the witness against him, to call witnesses on his behalf and cross-examine people who are accusing him of misdeeds,” Graham told Sean Hannity.

This is a big signal to Democrats that their efforts are going to be dead on arrival in the Senate.

And their efforts wouldn’t just be dead there, but in the 2020 election as well unless they stop the madness.