REPORT: The New York Times: A Dangerous Misinformation Tool Of The Left

From misrepresentations to outright character assassination, the New York Times has become so biased, so divisive, so willing to place ideology in front of facts, that it should never be looked upon as a legitimate source of news again. 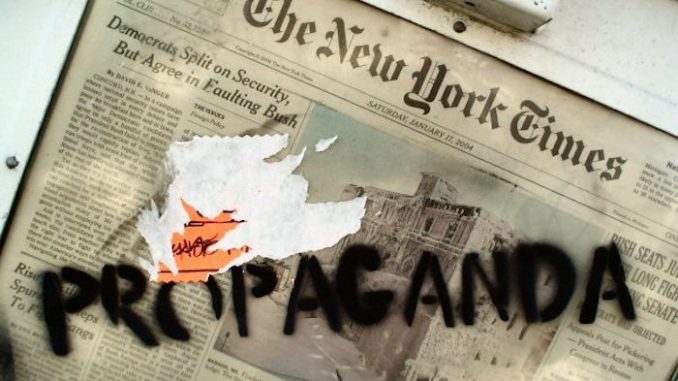 America’s “paper of record” has long been an arm of the Democratic Party, but it wasn’t always that way.

During those last 60 years, the paper has become more openly liberal. Its op-ed page is, of course, hardcore left. But that bias has been creeping into the news pages for years, with reporters and editors twisting facts and spinning the news to fits its leftward lean, often in support of Democrats.

But everything changed Sunday. On Sept. 15, 2019, The New York Times became a dangerous tool of misinformation controlled by the left, one that simply can no longer be trusted on any story. On that day, the paper put out a “bombshell” headlined: “Brett Kavanaugh Fit In With the Privileged Kids. She Did Not.” The story was all about Deborah Ramirez’s experience at Yale University, where she met the future Supreme Court justice. Years later, in an attempt to derail his nomination to the Supreme Court, she would claim he thrust his penis in her face at a dorm party when they were both students.

The story — written by two Times reporters, Robin Pogrebin and Kate Kelly, and adapted from their forthcoming anti-Kavanaugh book — contained this: “We also uncovered a previously unreported story about Mr. Kavanaugh in his freshman year that echoes Ms. Ramirez’s allegation. A classmate, Max Stier, saw Mr. Kavanaugh with his pants down at a different drunken dorm party, where friends pushed his penis into the hand of a female student.”

Well. Quite an accusation.

But there was a problem. A big problem.

Mollie Hemingway, a senior editor at The Federalist, got an advance copy of the book. She tweeted, “The book notes, quietly, that the woman Max Stier named as having been supposedly victimized by Kavanaugh and friends denies any memory of the alleged event. Seems, I don’t know, significant.”

The story gets very ugly from here.

The Times put out an “Editor’s note” (not a correction, mind you).

“The book reports that the female student declined to be interviewed and friends say that she does not recall the incident. That information has been added to the article,” the note said.

Here’s why what The Times did Sunday is far worse than what they normally do. It’s one thing to spin facts and twist context to make a case (both sides do that). But omitting a fact that kills your entire story is an entirely different thing.

This wasn’t an accident. That detail — the fact that friends of the alleged victim told the book authors that she doesn’t remember a thing about the alleged incident — was contained later in the book, which was written by the same people who wrote the article. They knew that they were lying by omission and they did it anyway.

Even more. The authors on Tuesday said they had included the important information but claimed an editor took it out. And yet they let the story run, saying nothing to anyone until they were found out.

Here’s the bottom line: The New York Times deliberately withheld information that shot holes in their salacious story. The authors knew it, the editors knew it, and yet they did it anyway. The goal — take down a Supreme Court justice, an effort that failed the last time they tried.

So deep is the hatred for President Trump that a once-great newspaper is now sinking so low as to omit key facts just to damage the president. The Times now is publishing unverified gossip under the guise of news reporting, and even omitting facts that unravel its flimsy “bombshell.”

The Times’ motto, tucked in the upper left ear of the print edition for the last 115 years, reads “All The News That’s Fit To Print.” But after what they did Sept. 15, 2019, they should change that to “If You’re Looking For Facts, You Won’t Find Them Here.”

The New York Times is dead. And that ain’t fake news.