REPORT: Today’s Democrat Party Is So Radical Barack Obama Would Be Considered Too Conservative In 2020

It’s an increasingly odd collection of tantrums, hysterics, projected self-loathing, and the near-constant putting down of America as a nation and a people.

That’s the Democrat Party of today and it’s such a disastrous mess of division and incompetence not even Barack Obama would be considered radical and “woke” enough to win its nomination in 2020. 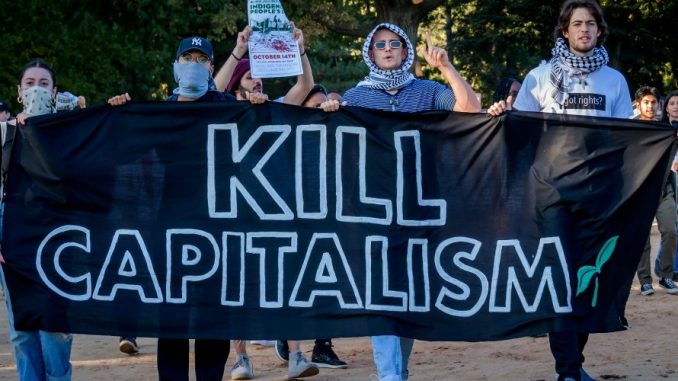 Via Issues and Insights:

To illustrate what sort of zealots now own the Democratic Party, realize that Barack Obama probably wouldn’t be the nominee if he were running for president. It’s a scathing commentary on the left.

It became obvious when, in this age of wokeness, the former president criticized today’s cancel culture, in which the outrage mob turns anyone who holds an unapproved opinion into an instant social and political outcast. Ostracism replaces discussion. There is no debate, the airing of differing opinions is not allowed.

“This idea of purity and you’re never compromised and you’re always politically ‘woke’ and all that stuff,” Obama said last week at an Obama Foundation event, “you should get over that quickly. The world is messy. There are ambiguities. People who do really good stuff have flaws. People who you are fighting may love their kids. And share certain things with you.”

Columnist Mollie Hemingway noted on Fox News that Obama’s “message does not play well in the Democratic primary,” as “the excitement is definitely with the wing of the party that does not want to be open or tolerant to a wide swath of voters.”

(That last sentence is critically important. The radical left-wing of today’s Democrat Party is as close to outright Nazi-like totalitarianism that we’ve come during America’s modern era. The attempted impeachment of President Trump isn’t a normal political inquiry so much as it is a dangerous political lynching against not only the president but his tens of millions of patriotic America-First supporters.)

Granted, Obama was warning his party comrades about taking things too far, that their fanaticism will hurt them in elections. Yet one callow fellow writing in the NYT suggested Obama holds the same “regressive views” of older Americans who “stubbornly reject progress and refuse to show compassion.” Published comments largely went against the writer, who also caught a fair amount of criticism on his twitter account. But there were enough comments in the Times to show just how militant the left has become:

“I’m the same age as Obama, but he has clearly been influenced by right-wing propaganda and I suggest he should get away from the Wall Street enablers he has surrounded himself with and start talking to people instead of lecturing them.”
“He became a coward and now he wants others to follow his lead under the guise of some counterfeit ‘maturity.’”
“Shame on Obama for his obtuseness.”
“Obama is a pedantic scold. But he only seems to scold young people and people of color. Mr. Audacity of Hope showed no audacity at all when it came to punishing the crooked bankers.”
“I voted for that semi-empty suit and never stopped regretting it. Aside from half a medical insurance system named after him, he puttered and putted through eight years of impotence and irrelevance.”
“The biggest disappointment in my lifetime is Obama’s failure. He had the FDR moment in the palm of his hands and what did he do? Sold us all out and he’s every bit as responsible for Trump as is the DNC and the duplicitous meritocracy who sold our soul to the devil.”
“Thank you for this, Mr. Owens. … Work(ing) across the aisle is nonsense when the Republican Party is founded on racist policies. The Dems aren’t much better, but maybe The Squad can get something done.”
“If fewer boomers ‘overlooked’ Donald Trump’s corruption, bigotry and narcissism — because he had lots of money and threw good parties — and instead ‘cancelled’ him, maybe we wouldn’t be stuck with this sorry excuse of a human being as our president.” Obviously, these folks don’t recall the man who once said Democrats should take a gun to a knife fight, whose aide told party operatives to “punch back twice as hard,” who didn’t reign in excess when supporters said criticism of his policies was the manifestation of racism and examples of hate speech.

The Barack Obama of 2008 had not yet “evolved” on same-sex marriage, making him a bigot and homophobe today, and also pledged to cut spending. The big-deal health care takeover named after him doesn’t satisfy today’s Democrats because it isn’t Medicare for All. As president he deported too many illegal immigrants, promised that those who weren’t would not get health care benefits, vigorously defended free speech, and supported cutting the corporate tax, which in the Elizabeth Warren-Bernie Sanders era is an abomination. These positions would have already disqualified him from contention in the Democratic Party of 2019-20.

Though Obama was rightly critical of the cancel culture, we won’t argue that he didn’t open the door for it.

“The seeds of cancel culture and leftist outrage were undoubtedly planted during his tenure in the White House. Back in 2012, for example, Obama would never have openly called Mitt Romney a racist. But he didn’t have to because surrogates like Democratic National Committee Chairwoman Debbie Wasserman Schultz did it for him,” says Federalist political editor John Daniel Davidson.

Breitbart’s John Hayward tweeted “Obama’s brand of messianic populism was a major ingredient in the development of today’s cancel culture.”

“Everyone who criticized Barack Obama was portrayed as evil, driven by greed, racism, or money from their sinister corporate puppet masters,” Hayward continued. “His early statements as president literally included telling his critics to shut up and go to the back of the bus.”

But faux messiahs are quickly replaced, and the Democrats have already moved on to another redeemer. When that one is no longer radical enough for the agitators, they’ll find someone even more hostile to continue their assault on freedom and mutual respect.