Yes, Joe Biden Really Did Say A Cure For Coronavirus Would “Make The Problem Worse.” (VIDEO)

It was another gaffe in a seemingly unlimited line of gaffes for presidential hopeful, Joe Biden.

And yet, if we are to dig a little deeper into what his actual meaning might have been, is something far more sinister going on here? 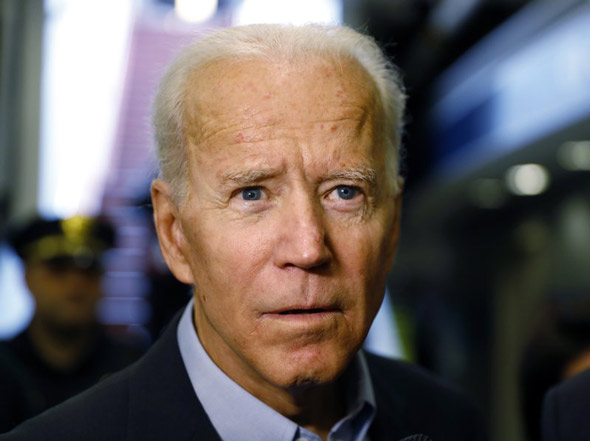 Democratic presidential candidate and former VP Joe Biden has been accused of being out of the limelight as the coronavirus pandemic shuts down the country.

So his handlers said set ’em up, Joe, and scheduled a whirlwind of video appearances. So far, they’ve spotlighted his famous knack for stumbling into word salad.

Fresh off an online appearance in which he waved off his first point about the pandemic as his teleprompter allegedly malfunctioned, Biden came to The View seeking redemption. He appeared via satellite to reveal how he would handle the current coronavirus crisis.

He did offer one gem in response to Sara Haines’s question on whether businesses should reopen very soon.

“Are you at all concerned, as Trump said, that we cannot let the cure be worse than the problem itself?” Haines asked.

Biden noted in his reply that the COVID-19 cure “will make the problem worse, no matter what.”

No one from The View followed up for a clarification. But social media didn’t let it go, seizing on it like a dog with a meaty bone.

Joe Biden went on the View and reminded everyone why he has been in hiding. https://t.co/esMUEkePUu

After the initial collective shaking of heads at another bizarre Biden gaffe, some deeper reflection reveals something potentially far more troubling than merely an old politician with diminished cognitive abilities.

Could Joe Biden have unintentionally revealed how the far-left elite in America and around the world feel about what appears to be a “game changing” treatment option for the coronavirus as outlined earlier by President Trump last week? Namely, that these far-left elites are outraged and panicked that a viable treatment was found so soon that involves a combination of anti-viral drugs that have been around for decades – meaning their use can be fast-tracked almost immediately which would greatly alleviate the hysteria surrounding the outbreak that the media has worked so hard to create.

When Mr. Biden mumbles how the “cure would make the problem worse” was his confused mental state actually pulling back the curtain on the panic the far-left is in when faced with the possibility that the virus hysteria will diminish, Americans will get back to work, the economy will recover, and President Trump is then re-elected in a landslide come November due in great part to how remarkably well he has navigated this crisis?

If so that means these media elites, these Democrats, these globalists, were willing to see more people infected and some of them die all in the name of gaining more political power.

As of this writing, Democrat governors across America are attempting to deny the use of long-used malaria drugs to treat the coronavirus despite growing evidence both in American and around the world that those drugs are quite effective in battling the virus. In New York state their use has been extremely limited in a highly controlled (some fear manipulated) environment. This has left people confused and increasingly suspicious of what might really be going on  – and for good reason. The use of the drugs in question have been around for decades. There is no inherent threat to their use in this application beyond the threat of any drugs if they are administered by healthcare professionals.

HYDROXYCHLOROQUINE & AZITHROMYCIN, taken together, have a real chance to be one of the biggest game changers in the history of medicine. The FDA has moved mountains – Thank You! Hopefully they will BOTH (H works better with A, International Journal of Antimicrobial Agents)…..

Are the elites attempting to continue the level of panic and hysteria for as long as possible in order to achieve some kind of political victory? As outlandish as that sounds, those who are now claiming that to the case might actually be on to something especially when we see Democrat governors denying doctors the ability to administer to coronavirus patients a simple and readily-available treatment option.

It really does require one to look at the situation more closely and ask, “What the heck is really going on here?”

“This is the most promising thing I have seen so far.”

“A highly respected New York physician is urging all healthcare professionals in American and around the world to initiate a coronavirus treatment plan that includes the drug Hydroxychloroquine, described by President Trump days earlier as promising, which Dr. Zev Zelenko has been administering to his patients throughout Monroe, New York which is one of the virus hotbeds. Dr. Zelenko states this 5-day round of treatments has resulted in the following:

Here is the doctor’s urgent letter to all healthcare providers. Please read and share far and wide as it will likely offer some much-needed hope and calm to many who continue to be panicked about the coronavirus due to the media’s 24/7 hype machine. As for Dr. Zelenko, he  is already being attacked by the far-left media machine for his work in trying to save lives.”